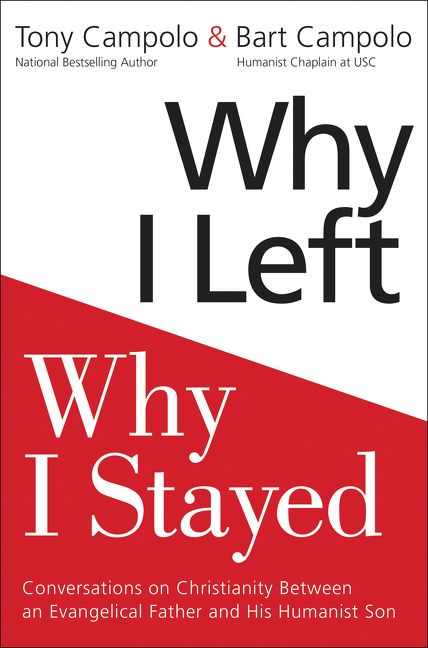 At this month's Book Club, we will be discussing Why I Left, Why I Stayed: Conversations on Christianity Between an Evangelical Father and His Humanist Son by Tony Campolo and Bart Campolo

Bestselling Christian author, activist, and scholar Tony Campolo and his son Bart, an avowed Humanist, debate their spiritual differences and explore similarities involving faith, belief, and hope that they share.

Over a Thanksgiving dinner, fifty-year-old Bart Campolo announced to his Evangelical pastor father, Tony Campolo, that after a lifetime immersed in the Christian faith, he no longer believed in God. The revelation shook the Campolo family dynamic and forced father and son to each reconsider his own personal journey of faith—dual spiritual investigations into theology, faith, and Humanism that eventually led Bart and Tony back to one another.

In Why I Left, Why I Stayed, the Campolos reflect on their individual spiritual odysseys and how they evolved when their paths diverged. Tony, a renowned Christian teacher and pastor, recounts his experience, from the initial heartbreak of discovering Bart’s change in faith, to the subsequent healing he found in his own self-examination, to his embracing of his son’s point of view. Bart, an author and Humanist chaplain at the University of Southern California, considers his faith journey from Progressive Christianity to Humanism, revealing how it affected his outlook and transformed his relationship with his father.

As Why I Left, Why I Stayed makes clear, a painful schism between father and son that could have divided them irreparably became instead an opening that offered each an invaluable look not only at what separated them, but more importantly, what they shared.

Steve (not Steve Adams; one of the other ones!) will be moderating this month. Hope you can join us for some thoughtful discussion.

Upcoming books:
June: Between the World and Me by Ta-Nehisi Coates (moderated by Carol)
July: White Rage: The Unspoken Truth of Our Racial Divide by Carol Anderson (moderated by Rodney)