NOTE: THIS IS RESCHEDULED FOR DECEMBER 8th BECAUSE OF WEATHER. 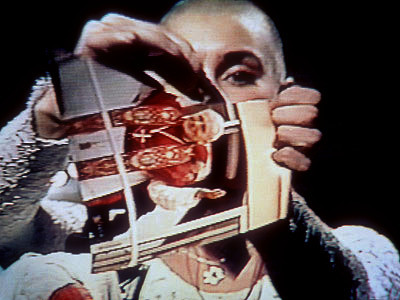 Professor David Kyle Johnson is an LVH December favorite! In the past he's discussed such topics as whether St. Nicholas even existed as a historical figure and why it's ok for secular humanists to celebrate Christmas. This year we'll welcome him to speak on Saturday Night Live's tendency to push the envelope on religion.

On the October 3 1992 SNL, when Sinéad O’Connor called the Pope “the real enemy” and tore up his picture, the backlash was fierce; the episode effectively ended her career. But, when you think about it, her stunt wasn’t that different from other things that have been done on the show. From George Carlin’s opening monologue on the very first episode (where he essentially calls religion a crutch that can leave you permanently disabled), to sketches like “Djesus Uncrossed,” “God is a Boob Man,” and “The Religetables,” SNL has never been afraid to be blasphemous and sacrilegious. And I haven’t even mentioned The Church Lady, that time Jesus made fun of Tebow in the Bronco’s lockeroom, and that time Louis C.K. implied God was a serial killer. There was backlash about all these episodes too. So why didn’t they end anyone’s career? In this talk, Professor Johnson will explore these sketches and acts (and the public response to them) to try to get to the bottom of all of this. Ultimately, he'll argue, they didn’t end anyone’s career because they probably make a pretty good point. And with that in mind, he’ll conclude by arguing that…well… we probably all owe Sinéad O’Connor a huge apology.

Those who wish to stay for lunch after the event can join us at a local restaurant to be determined.

Street parking is free on Sundays, but please note there is construction in the area. We suggest arriving early if you've never been to the location. Garage parking is available in the Community Deck accessible from 6th and Walnut Streets (both one way).

Dr. David Kyle Johnson is Associate Professor of Philosophy at King’s College in Wilkes-Barre, Pennsylvania. He earned a master’s degree and doctorate in philosophy from the University of Oklahoma.

At Oklahoma, he won the coveted Kenneth Merrill Graduate Teaching Award. In 2011, the American Philosophical Association’s committee on public philosophy gave him an award for his ability to make philosophy accessible to the general public.

Professor Johnson regularly teaches classes on metaphysics, philosophy of religion, philosophy of mind, and logic, as well as courses on critical thinking and scientific reasoning. He has published papers on human freedom, the problem of natural evil, the multiverse, the existence of souls, and many related topics in such journals as Religious Studies, Sophia, Philo, Philosophy and Literature, and Think. He also maintains two blogs for Psychology Today.

Professor Johnson also publishes prolifically on the intersection of pop culture and philosophy. One of his books, Inception and Philosophy: Because It’s Never Just a Dream, inspired an [email protected] talk with more than half-a-million YouTube views. He also has written numerous articles that explore the relationship between philosophical questions and such pop cultural phenomena as The Hobbit, Doctor Who, Batman, South Park, Johnny Cash, Quentin Tarantino, and Christmas.