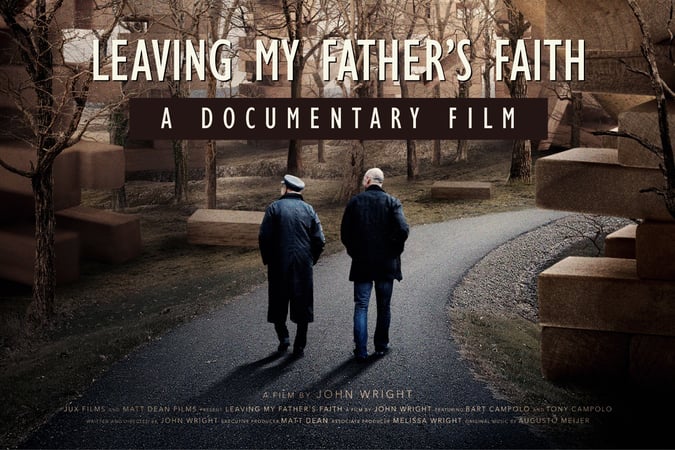 After Thanksgiving dinner, Bart Campolo asked his dad, the well-known preacher Tony Campolo, to sit down to talk. Bart wanted to give his father some shocking news: that after a lifetime of work as a prominent minister himself, he was no longer a believer in the Christian faith. It was the beginning of a candid, meaningful exchange between a father and his son about belief, storytelling and the power of our relationships.

Join us for a special screening of the new documentary, Leaving My Father's Faith. After the screening, we will have a discussion to share thoughts about the film and reflections on our own experiences. Light refreshments will be served. The event is free, but donations will be accepted to help offset the costs.

Parking is available at the Community Deck, best accessed from Walnut Street (which is one way) between 6th and Law Streets. Street parking is also available in the neighborhood; meters are not enforced on Sundays.

**PLEASE NOTE: to encourage attendance by open-minded believers, this presentation is being offered in the afternoon rather than our normal Sunday morning time slot, and will be promoted to the general public. This is also a great opportunity for Humanists and other nonbelievers to invite religious friends and family members to share an enriching experience that should lead to a productive dialogue about beliefs, relationships, and how they intersect.

Tony Campolo is a sociologist, pastor, author and public speaker. He is perhaps best-known for his role as spiritual advisor to President Bill Clinton, and for being a prominent voice in the evangelical church. He is a leader of the Red-Letter Christian movement, which aims to emphasize the teachings of Jesus. The New York Times describes Tony as “one of the most important Christian evangelical preachers in the last 50 years.”

Bart Campolo is an author, speaker and the Humanist Chaplain at the University of Southern California. He is co-founder of Mission Year and a prominent former urban minister, speaking internationally to progressive Christian groups. He made news during 2014 when he announced that he no longer believes in God. The New York Times describes Bart as “a rising star of atheism.”

Read David Chivers's review of their book, Why I Left, Why I Stayed here at The Humanist.

John Wright is an independent filmmaker and radio producer from Belfast, Northern Ireland living and working in Arizona and Southern California. He is the son of a Presbyterian minister and developed an early interest in the questions answered by religion.